For those who grew up visiting arcades in the ‘80s, Dragon’s Lair was a big deal. It was one of the first games to feature high-quality, movie-like animations as part of its gameplay. These scenes were created by the legendary Don Bluth, who was renowned for works such as An American Tale, Pete’s Dragon, and The Land Before Time, among many others. The main point of the game was that, while the player had minimal control over the events that happened on screen, they must make split-second decisions at important moments in order to avoid danger and keep their character alive. It was, in essence, like playing a cartoon.

The idea of an interactive cartoon was quite novel at the time and stayed relevant for a couple of years after it first launched. Dragon’s Lair found quick popularity as it took more than a few quarters from kids and adults trying to learn how to beat it, especially since it was among the first games to ever charge 50 cents for a single play.

The drawback to it’s trial-and-error style however, meant that players who had gone through the challenge of memorization found little reason to play it again after they had completed the game. There was some replay value in the many death scenes that would pop-up, but anyone playing for a while would quickly explore those too. While this design definitely didn’t help the game’s longevity, it made for some cool moments where crowds gathered around gamers who had already beaten the game to see the master in action. Regardless, once you finished the game, you really experienced everything that it had to offer.

Flaws aside, Dragon’s Lair became a cult classic, spawning many ports, sequels and adaptations. Sadly, most of them didn’t really go anywhere, ports in particular were wildly different since consoles of the ‘80s didn’t have the capability that the arcade hardware had. Despite the relative lack of popularity of the other works such as Dragon’s Lair 2, the original shined on. During its stint in arcades during the early ‘80s, Dragon’s Lair reportedly generated over $34 million for its publisher, which was outstanding considering that the game launched in the midst of the video game crash. 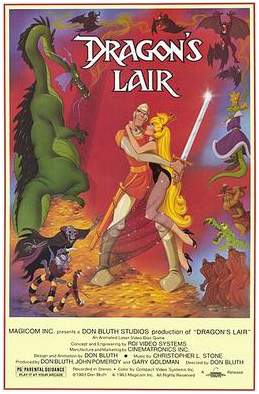 Indeed, those who visited arcades during the time definitely had a lot to say about this game, and the title quickly became the favorite of many, which is why some of us jump at the news that we can get a working miniature copy from New Wave Toys as we speak right now.

The cabinet was designed and is manufactured by the aforementioned company as part of a Kickstarter campaign which, curiously, blew way past its initial funding goal of $75 thousand, making around $270 thousand. According to their Kickstarter page, the manufacturers describe the cabinet as the following:

“This 12 inch replica arcade machine Looks, Plays and Controls just like the vintage 1983 Dragon’s Lair Arcade Machine! This fully-playable, arcade-accurate replica is being developed by New Wave Toys in Los Angeles, CA and is officially licensed by Digital Leisure Inc… RepliCade Amusements feature authentic arcade ROMs as originally released in the full-sized arcade cabinets. Our Dragon’s Lair cabinet is no exception! It runs the original Laserdisc game on the Daphne emulator, and features all of the diabolical yet rewarding difficulty you remember from the arcade release.”

In the game’s RepliCade website, they listed these features:

The Dragon’s Lair X RepliCade cabinet faithfully recreates the original game we all know and love, but in a comfortably, bite-sized version. If you’re a fan of Don Bluth’s legendary arcade title from the ‘80s, then you won’t want to miss out on this one, especially since it only costs $119.99. The product is scheduled to start shipping in August 2020. 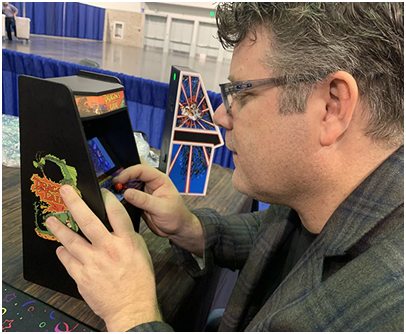 The post The Dragon’s Lair Mini Arcade Cabinet That You Simply Must Have appeared first on PrimeTime Amusements.